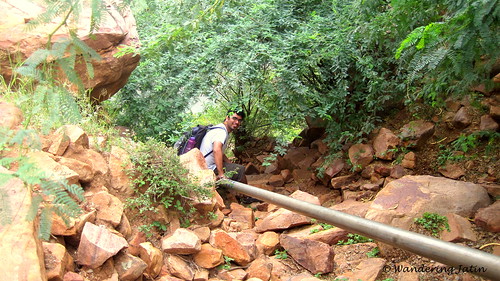 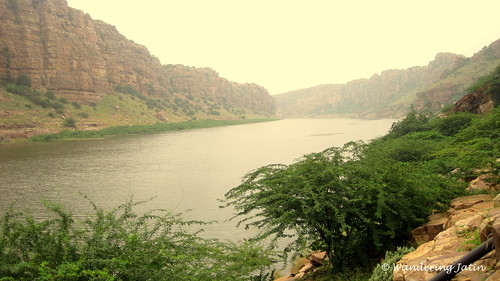 Down in the gorge by the Pennar river, we sat there looking at the natural marvel that was in front of us – Gandikota, the Indian Grand Canyon. Up and up went the peaks and being the only folks down there, we definitely felt like explorers from those tales. Sweaty from the trek and camping from last night, the adventurer in us wanted a bath in the river. Now the thing is, there was no river bed per se and we were standing on what-appeared-to-be the tip of another peak which was submerged in water and how deep the water was, we didn’t know. But we, the engineers, devised a solution for that too. Standing on that tip, we filled water in the only water bottle that we had carried down, and took bath in the waters of Pennar river, one by one! Well, it was fragrant, of the unusual kind, but still refreshing! Incredibly thirsty, we trekked uphill for an hour to almost snatch the water bottles of a few students visiting there for a school trip. 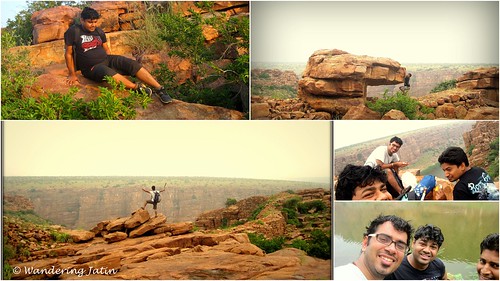 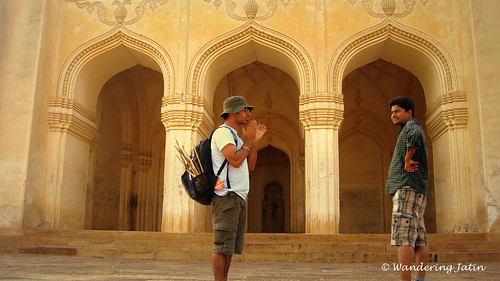 By the way, I am sure you can figure out by now, where the cover pic of this blog was clicked.

¶¶
ABOUT – Gandikota
Located in Kadapa district in Andhra Pradesh, Gandikota is a small village known for the 300 ft deep gorge view and the Gandikota fort, belonging to Vijaynagar times. You can also visit the jail, temple, granary, and the mosque. Most of these places have converted to ruins over time, and lack any major tourist activity, but still make for a scenic excursion. You can stay at the only accommodation nearby – Haritha Resorts, or camp, like us. Once you enter the fort premises, you can see a few locals, who should provide you basic groceries (and wood!).
¶¶

It was around afternoon of the day before that we had arrived in Gandikota from Yaganti, and crashed at the steps of the Gandikota prison for a nap letting the Sun calm down a bit. Later, we set afoot to explore the place and figure out camping ground for the night. We came across majestic views of the canyon with a steep drop down the river while the boulders tested us on physical levels. Devoid of any major human presence, we enjoyed the beautiful Sunset in the valley while listening to Prateek playing on his flute sitting on a cliff! I climbed to the higher boulders to survey the area for a flat ground where animals should cause minimal trouble. 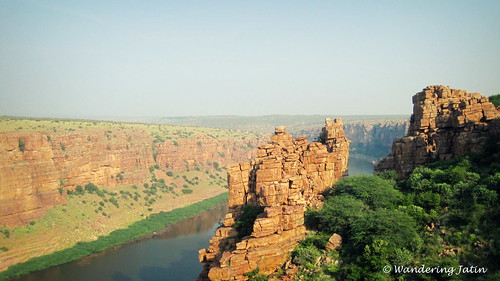 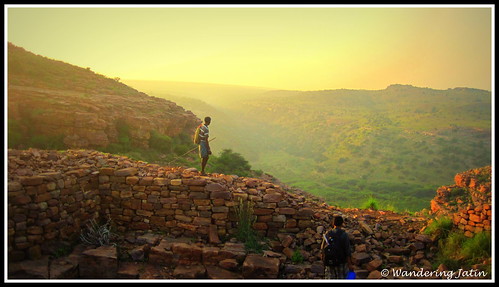 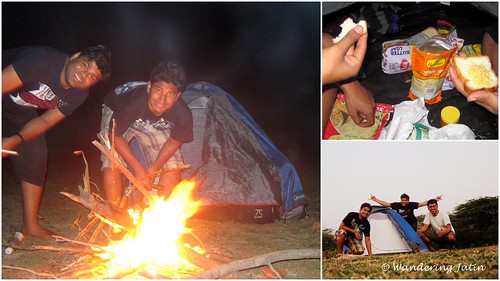 We were excited to pitch the tent that night as we had arrangements for the camp fire for the first time. Tent pitched and wood arranged from here and there, the three of us entered in the 2-man tent for a game of cards! It was hot that day and our lighting the camp fire didn’t help our case much either, but we had to do that anyway to keep the animals at bay. Post dinner at around 7-8 pm, It was a tough long night spent making peace with snoring and fighting for space. But the rains in the early morning made up for more than everything. It was beautiful. Our happy spirits intact, we left for more boulder-climbing and canyon-exploring when we came across ‘the pipe’ and decided to go down. Once we came back, we saw the mosque. Some tourists and lot of students had come by then and we left Gandikota cursing the graffiti-makers who would declare the name of their loved ones on these precious pieces from the past. 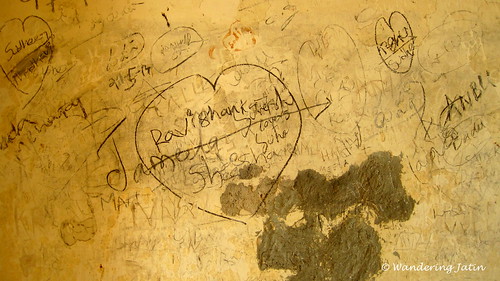 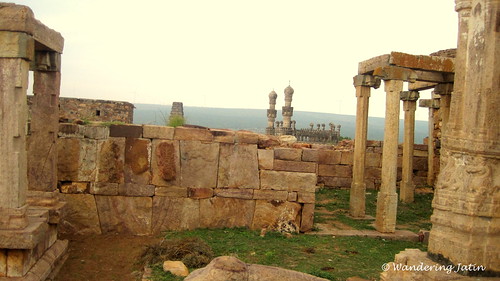 Moving on, we reached Belum Caves hopping another bus. Let’s go to the ABOUT bubble first:

¶¶
ABOUT – Belum Caves
These underground caves are second largest in the Indian subcontinent, known for their stalactite and stalagmite formations. You can hire a Govt. guide here. Claustrophobic folks, be watchful as the caves lack sufficient ventilation at places.
¶¶ 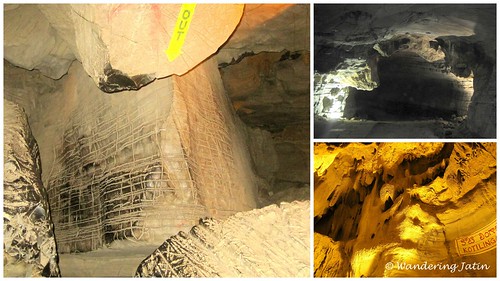 It is almost funny to recollect how we had started this trip. We had reached Nandyal at 4.30 am after a bumpy overnight ride in a bus which we caught in the same routine last minute action packed drama of planning, packing and rushing. Interestingly, Nandyal was nowhere on my map when we started but of course, bus operators knew better and advised us while saying ‘no direct to where you wanna go’. I made a mental note though to check out where Nandyal is, after the trip. Another bus and an auto ride later, we had reached Yaganti for the first stop – Yaganti temple and caves, from whereon we continued towards Gandikota and Belum caves. 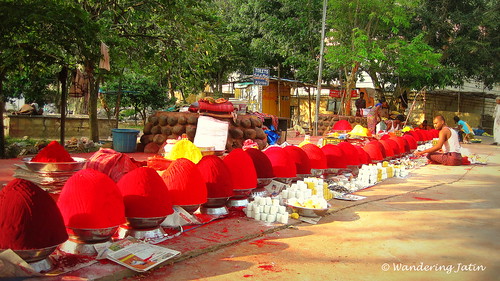 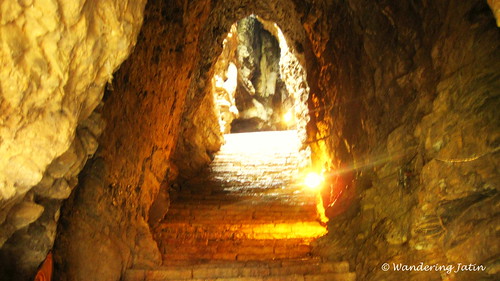 Amused by the beauty of all the natural wonders, and the tales from history around them, we headed back home while discussing why Indians have always linked natural beauty with God. 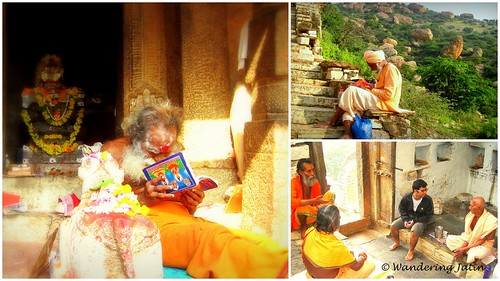 P.S. If you want to know how deep the water is, take a long stick and dip in the water. Good luck finding long sticks everywhere, though.
P.P.S. Where were these schools who take students to Gandikota when I was growing up?
P.P.P.S Who could have imagined, another scenic trip as this, just like our Kerala trip, could have started like this? 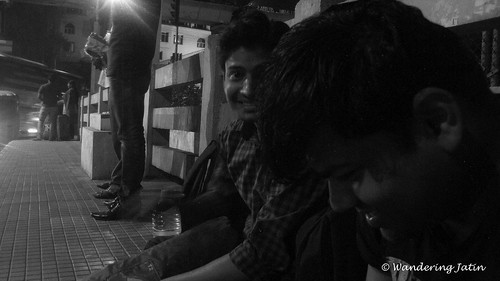 If you enjoy my travels, you can consider
-Following me on Facebook.
-Subscribing to this blog.

Thanks Pamela 🙂 Yeah, been long.

Wow. Looks awesome. Never been here, but want to now…

WanderingJatin
Reply to  The Untourists

Yep, it was awesome! Hope you make it there 🙂

Excellent trip. I too visited Yaganti and Belum recently.

Nice. I’m sure it must have made for a b’ful experience..?

Have been planning this trip for so long …. planning to go next month 🙂 Thanks for sharing

Nice, December should be good time to visit there. Have a great trip 🙂

This is my kinda fun! Am marking this for a trip….

Great, it will be awesome!

Excellent.. So much to explore in this great country.. Thanks for sharing this post my friend.

Yep, well said Vishal. 🙂 Thanks for dropping by.

What an adventure in following the pipe-line! Have you started exploring around Delhi?

Yep, it was great! Went to Bhutan, Khajuraho, etc. from here, but it’s not really around Delhi though, haha. Open to suggestions btw. 🙂

Hi Jatin, we are planning this weekend for Gandikota ride and overnight camping can you give us some tips where to camp and also do we have to take permission. And is there any threat of wildlife attacks near camping site.

Hey Manna! Good season makes it a wonderful idea to go there now. You can camp anywhere in the premises there. I had scouted the area by climbing the boulders to look for flat grounds, there are plenty. You can camp near the main view point (lil rocky) as well ahead of the granary or walk along the ridge to the left. No threat of animals, we encountered only the cows, but still exercise precaution. Have a safe trip, do come back to share your experience. 🙂

[…] known as the Indian Grand Canyon, Gandikota offers amazing splendid views of the 300 ft deep gorge of the Pennar River. We had camped at […]

Excited
So no permission required from anybody for camping at that site!!

When I was there, there was no guard at the site, just a few locals. If you find a guard, take permission as well as keep him informed. It usually helps.