Ride to Pune from Gurgaon Ep4: To Pune (via Aurangabad)

In the previous episode – I had covered almost a 1,000 kms from Gurgaon and reached Central India at Khalghat in Madhya Pradesh, where Narmada flows on its banks. I spent a crazy night out in the open by the crematorium, had a morning swim in the river and set off again. Now…

The Sun had risen and a good day stayed ahead of me at the saddle. I had planned to go to Pune, but via Aurangabad, paying my respects at Ghrishneshwar Temple, one of the 12 jyotirlingas. I am a believer of Energy, and Shiva has always been a mystical abstract concept for me, one which I am very curious to learn more about. That maybe one of the reasons why I have already visited 11 of the 12 jyotirlingas at the age of 27 as I am writing this. I will be exploring Shiva further more and reproducing my learnings in future write-ups.

Coming back to the road-trip, the highway was awesome, and with a good visibility ahead, I was testing the limits of the bike. Owning a timid 150cc bike like Yamaha FZ had its own advantages: the upper speeds are restricted and I was always within the safe biking speeds in our country. I was very fresh that morning and cruising at will. A chance landing of gaze at the sunflower field had me drawn for a halt, and the guy there was very friendly to take a million pictures of the new model in town, that was me! He asked me to ride right into the fields for better shots, and I of course obliged. 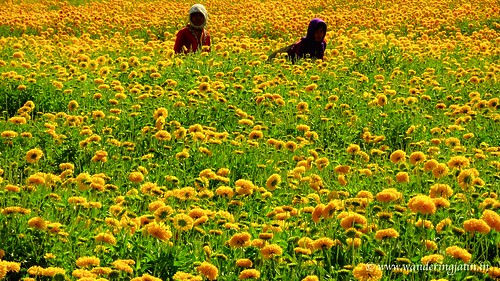 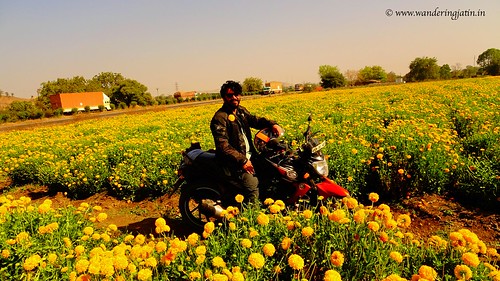 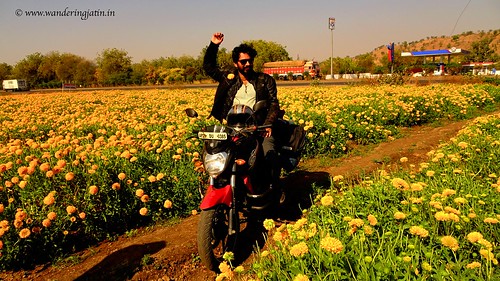 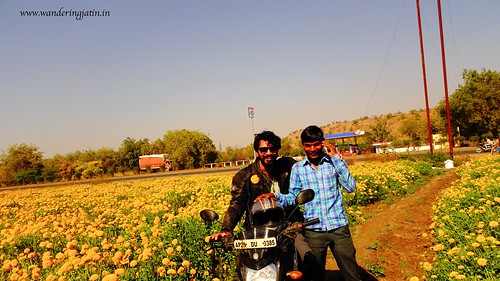 (See that phone in his hand? He is faking a call to overcome his camera shyness and managing a smile. Genius him!)

I had covered a lot of distance and entered Maharashtra before my meal break. The Sun was beating down very heavily and as always, I took the strategic time out in the form of a (long) power nap. I brought the mat inside the dhaba, had my fish curry, submitted my valuables to the dhaba owner himself and slept like a carefree child. Submitting my valuables can be a good point to argue but I have learnt to rely on my intuition and the kindness of strangers. A sense of responsibility awarded to someone reflects in their actions, is what I believe in.

After a long nap, I hit the road again when the Sun was much silent. I left the highway after Dhule and entered the country roads to reach Aurangabad. I was delighted beyond explanation when the curvy ghat roads of Sahyadris mountains came; the smile beneath my helmet upon slithering over those snake like roads was as broad as ever. Much to my own surprise, I had covered almost 350 kms even before the Sunset! It was because I had done 500 kms in 14 hours the previous day on horrible roads, I had hardly needed any breaks today on the butter smooth highways. Much like life and challenges right? The beauty of a pleasant phase is much exaggerated after a row of bad events. 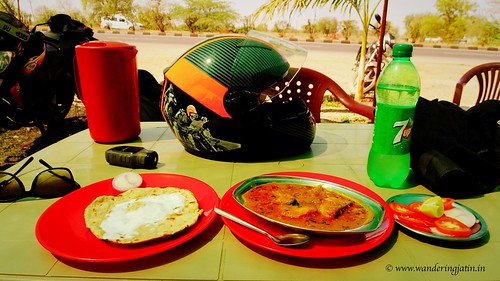 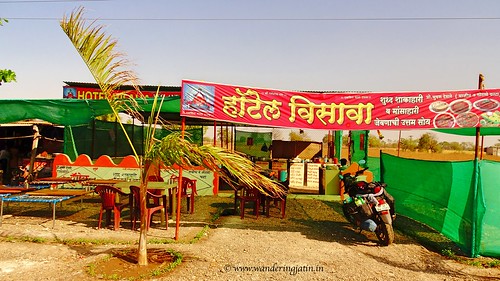 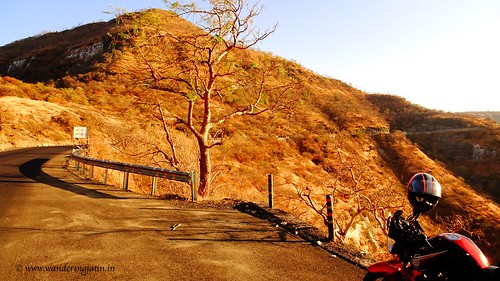 Anyhow, I reached Aurangabad, parked my bike, kept my luggage with the kids in the school that was right opposite, and went to the temple. It was a good surprise to find hardly any crowd in the temple, much unlike the other jyotirlingas. A priest there mentioned that the temple had been restored, as was visible – white cement patch-work over the ancient stone, the difference was stark! With no queues to stand in, I was directly inside the sanctum sanctorum and marveling at the jyotirlinga and the old art and architecture which now was very blurred with layers of ghee and tilak deposits humans left as a mark of offerings.

Once out, I united with the kids at school who offered me to enjoy the meal at their school. One of the kids also took me to the main building of the school and showed me around by himself, quite voluntarily, anxiously and happily knowing that I was a explorer. He said, “You should see our school!”, after happily offering me to stay in their school for the night, first hand. I was happy to see an uneventful trip to Maharashtra so far this time (Maharashtra is the only state I’ve repeatedly had bad experiences with harassing cops and unfriendly locals, why I do not know, but I am positive the trend will change) and just then the things went upside down. Senior officials came in and asked me to step out of the school premises with my luggage in the middle of the night, and even shouted at the kids for taking my luggage in. I was surprised! Are we teaching our students not to be helpful? “Okay, this maybe security concerns”, I thought and so, left the premises. And then came the guards who asked me to move my stuff farther from the school premises. “I am on the public road”, I expressed in shock but they wouldn’t budge. So I loaded the bike again and rode on with sleepy eyes to find any place to rest. It was a roadside tea stall who had only a table to offer. I gave him my valuables, and slept curled up on the iron table which felt much cold. But I slept nevertheless.

Once up and refreshed after almost 3/4 hours of sleep, I was interacting with the tea owners when a truck driver came in. He was from Haryana and we instantly connected in the foreign land, that was Maharashtra. He paid for my tea and would have it no other way. The tea stall guy also expressed his good wishes and bid me a good bye. An uneventful ride of around 4 hours at dawn saw me reaching Pune to greet my brother at the time of breakfast! Long hours of sleep ensued. 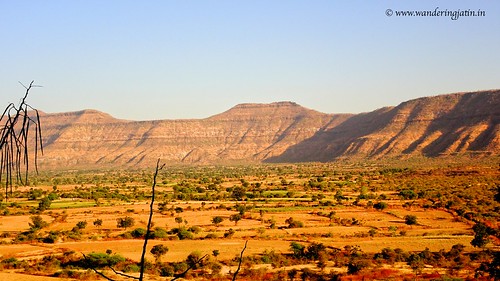 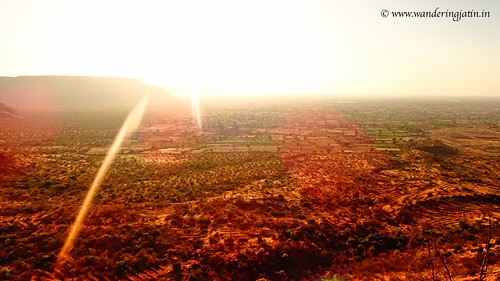 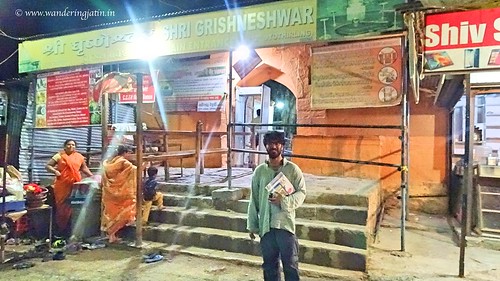 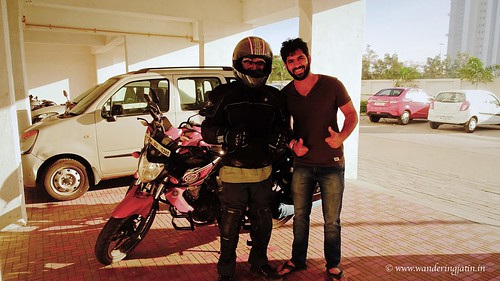 Have you been road tripping along with me on this ride to Pune? How has your experience been? Do share in comments and let me know.

Coming up next – How I led an awesome fun group of 5 to a trekking and camping trip to Harishchandragadh Fort? Stay tuned!

If you like my travels and tales, consider Subscribing to the blog. Follow my social media handles for live updates from my trips –

2 responses to “Ride to Pune from Gurgaon Ep4: To Pune (via Aurangabad)”