These were the ingredients which converted an average awesome Saturday to a super awesome one. You know of those times when you have 10 rsvps for an event starting at 5am and no one turns up? This was not one of those.

Except for two, 9 of us reported to the meeting point with sleep deprived faces but beaming with excitement. I addressed the pre ride briefing about the rules of the highway and we started. 60 kms of ride on a well laid tarmac, a halt for b.fast and an hour and half later, we arrived at the Bhongir Fort. The ride was uneventful except for Paranjay, my friend, maybe whose ride- Dio was struggling to keep up even at 80s! ( 😀 ) 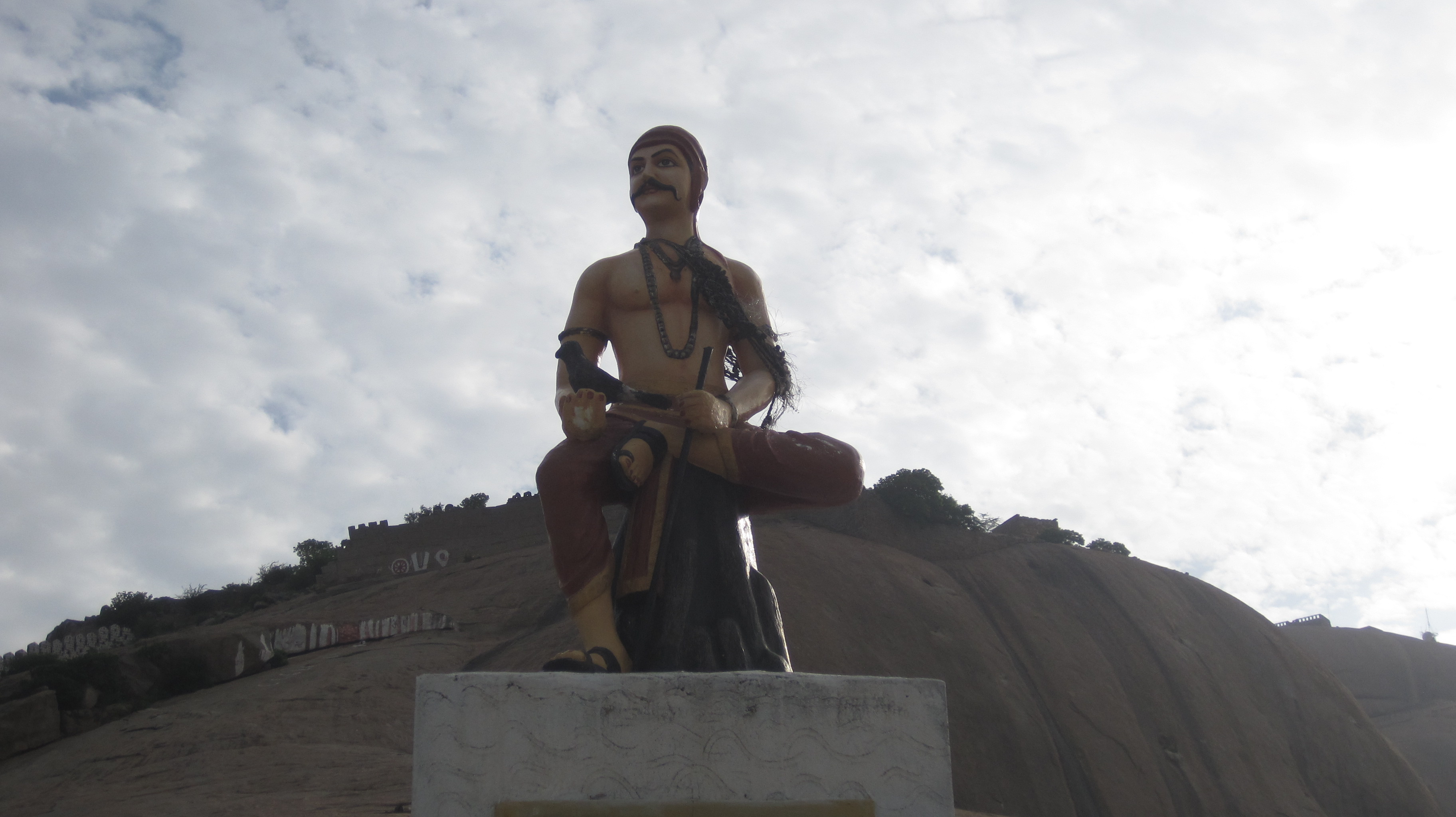 Another briefing and we began the hike. Bhongir Fort is built out of a large monolithic rock, dates back to 10th century AD and was once considered indomitable. 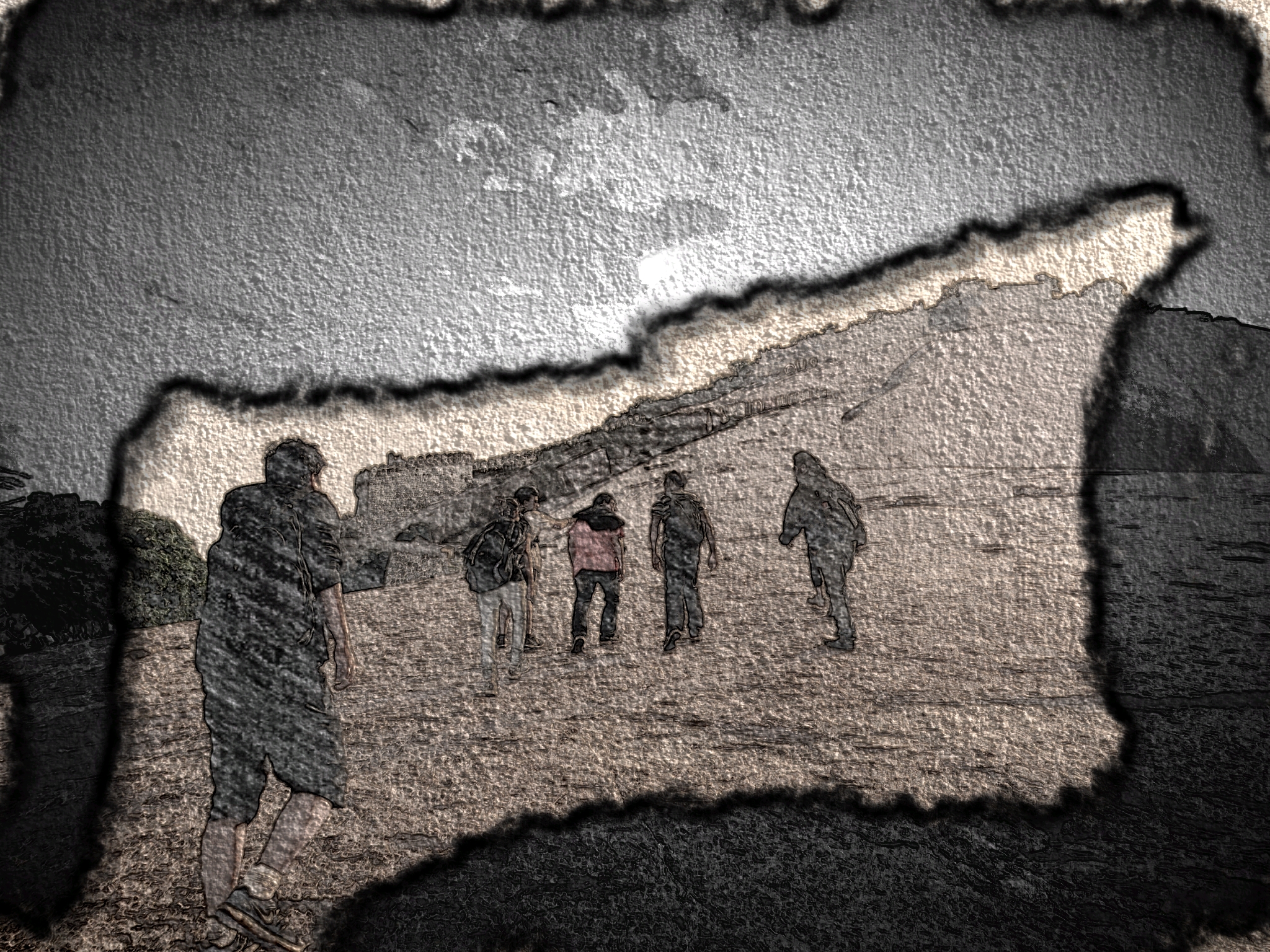 ¶¶
Travel Tip – Bhongir Fort
Nearest Rly. Station is Aler, the fort is located in Bhongir, some 60kms from Hyderabad. The trek difficulty level is mostly easy to medium but also offers challenges to the takers and lasts around 2 hours.Trekking groups from Hyd organise adventure activities like rope climbing too at the fort.
¶¶ 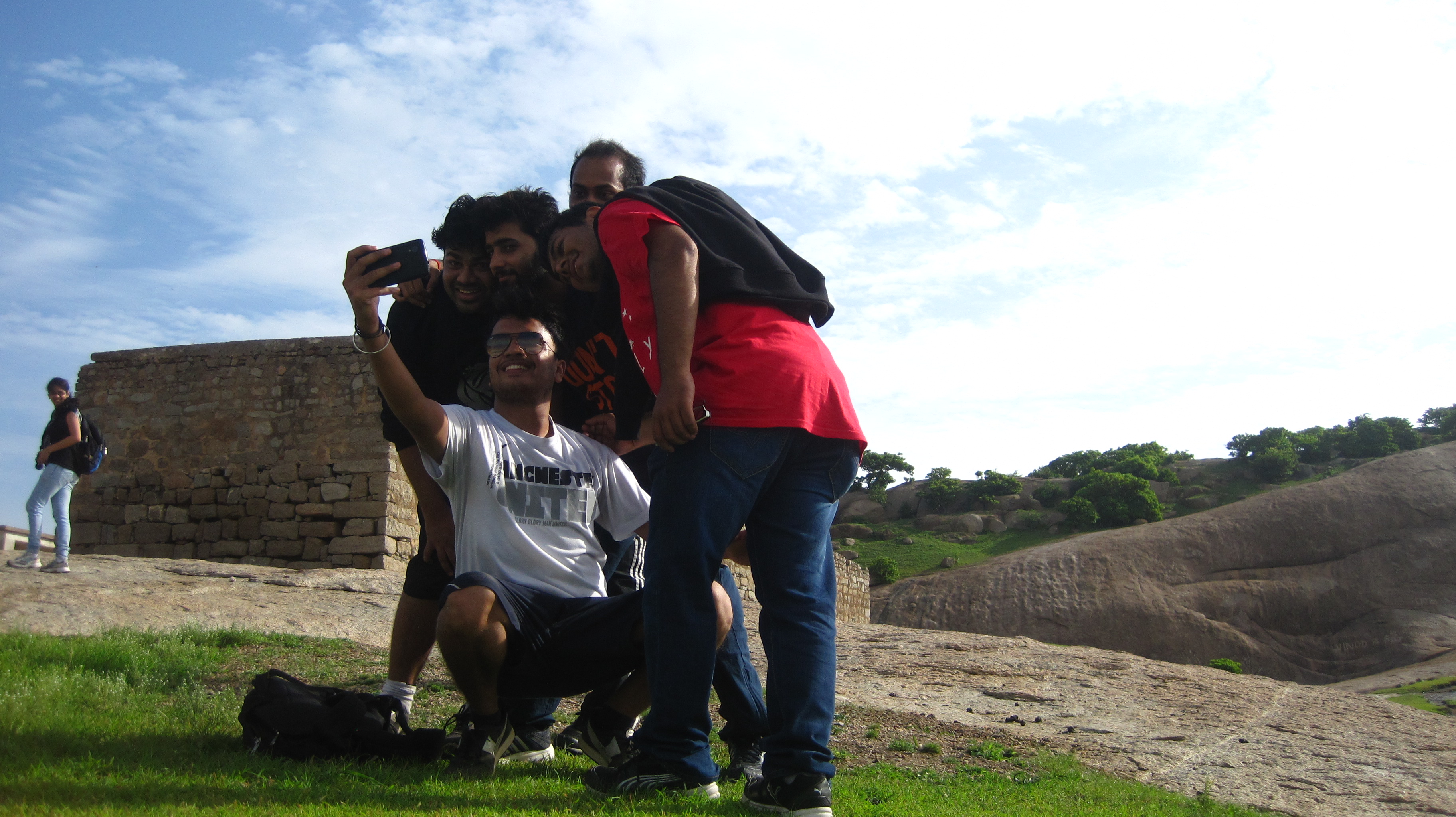 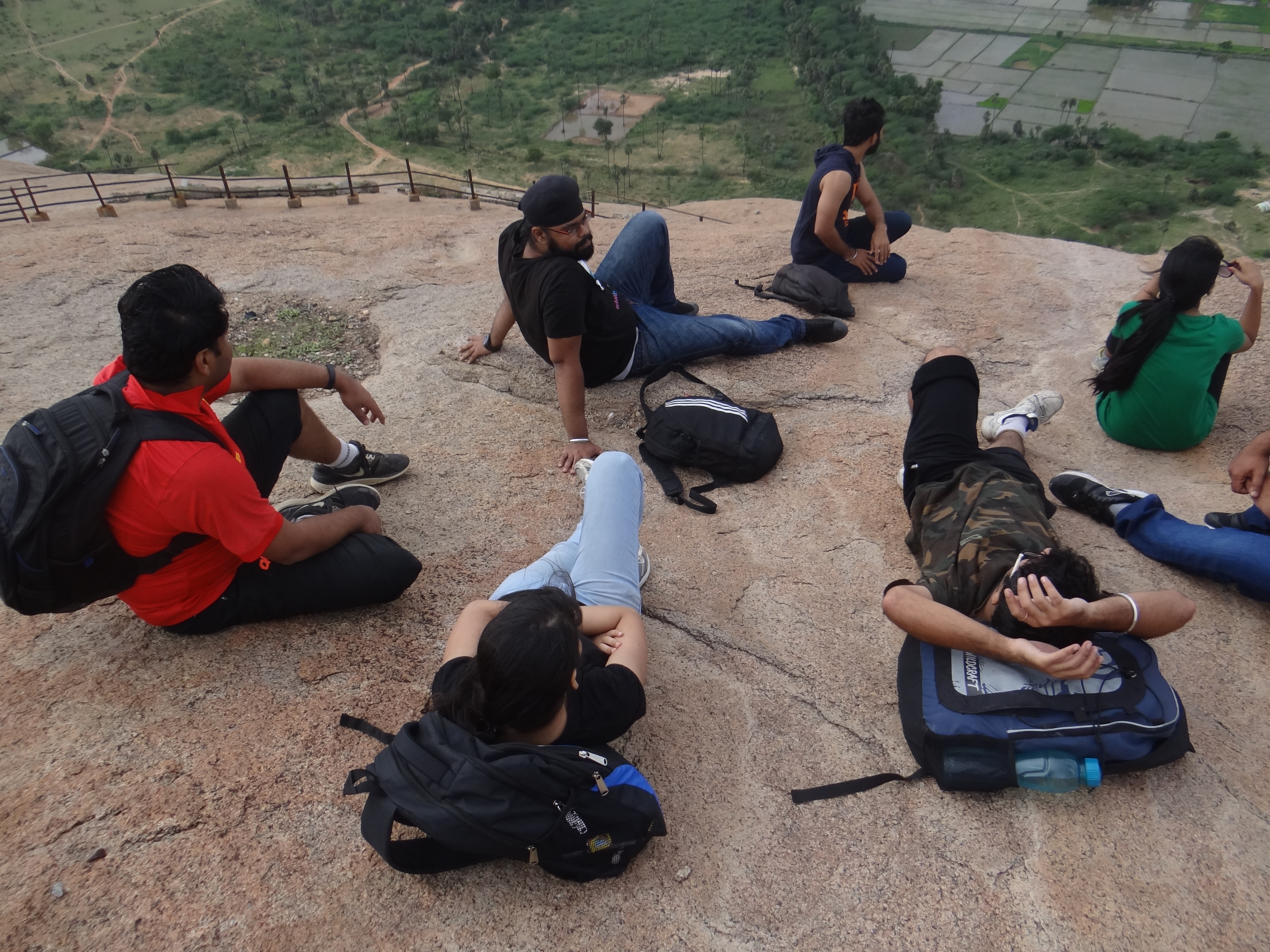 We trekked and rested, and trekked. Took just a little over too many pictures and trekked some more. We reached to the top, finally. Gopal had brought some paranthas and we devoured them insanely. And then we danced, following our teacher Purva, out of tune but we did! There was dumb charades, and the childhood games- Chidiya Udd (remm?) too. 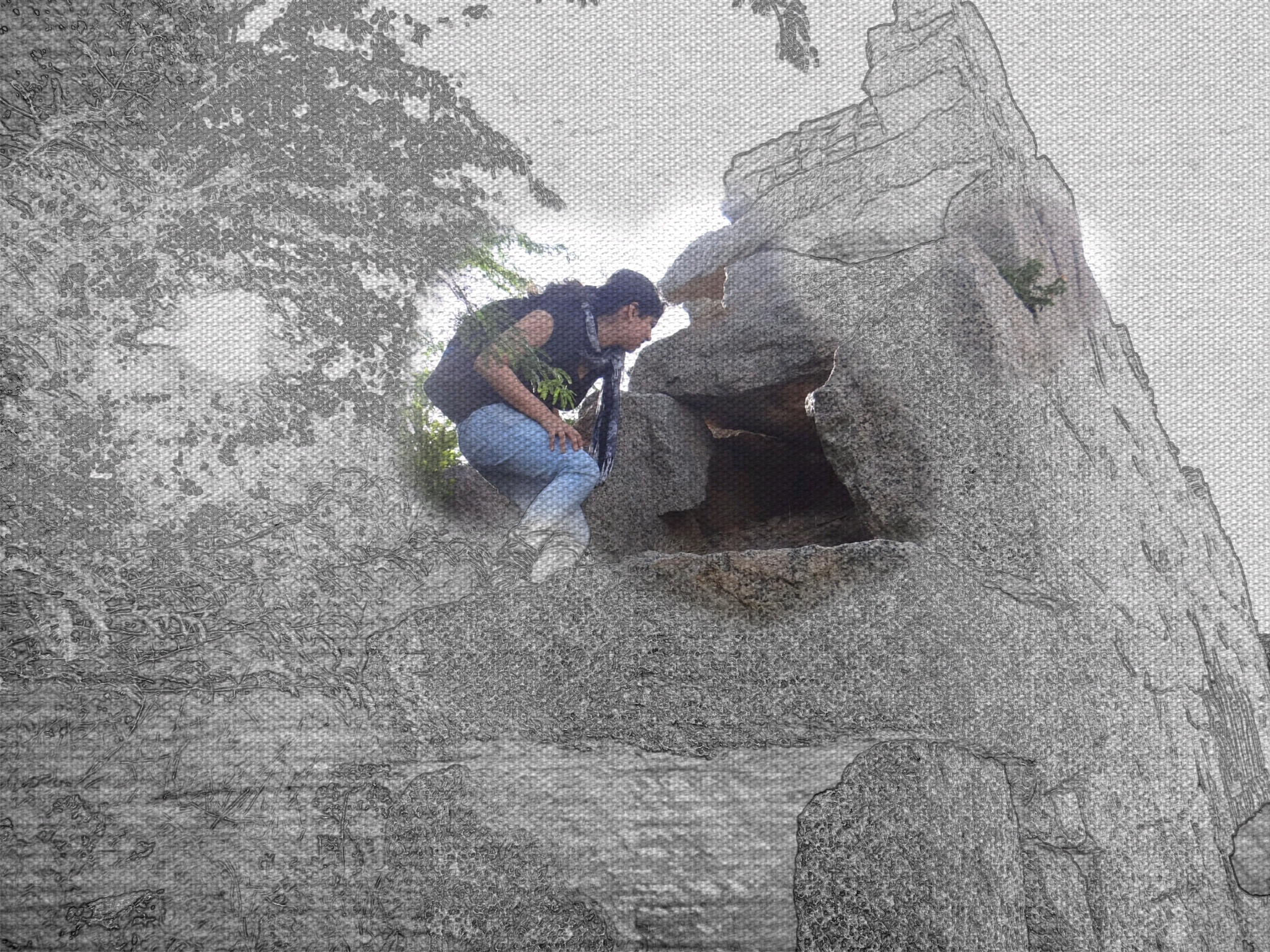 Purva, just before she was munched upon by the Fort Daemon. 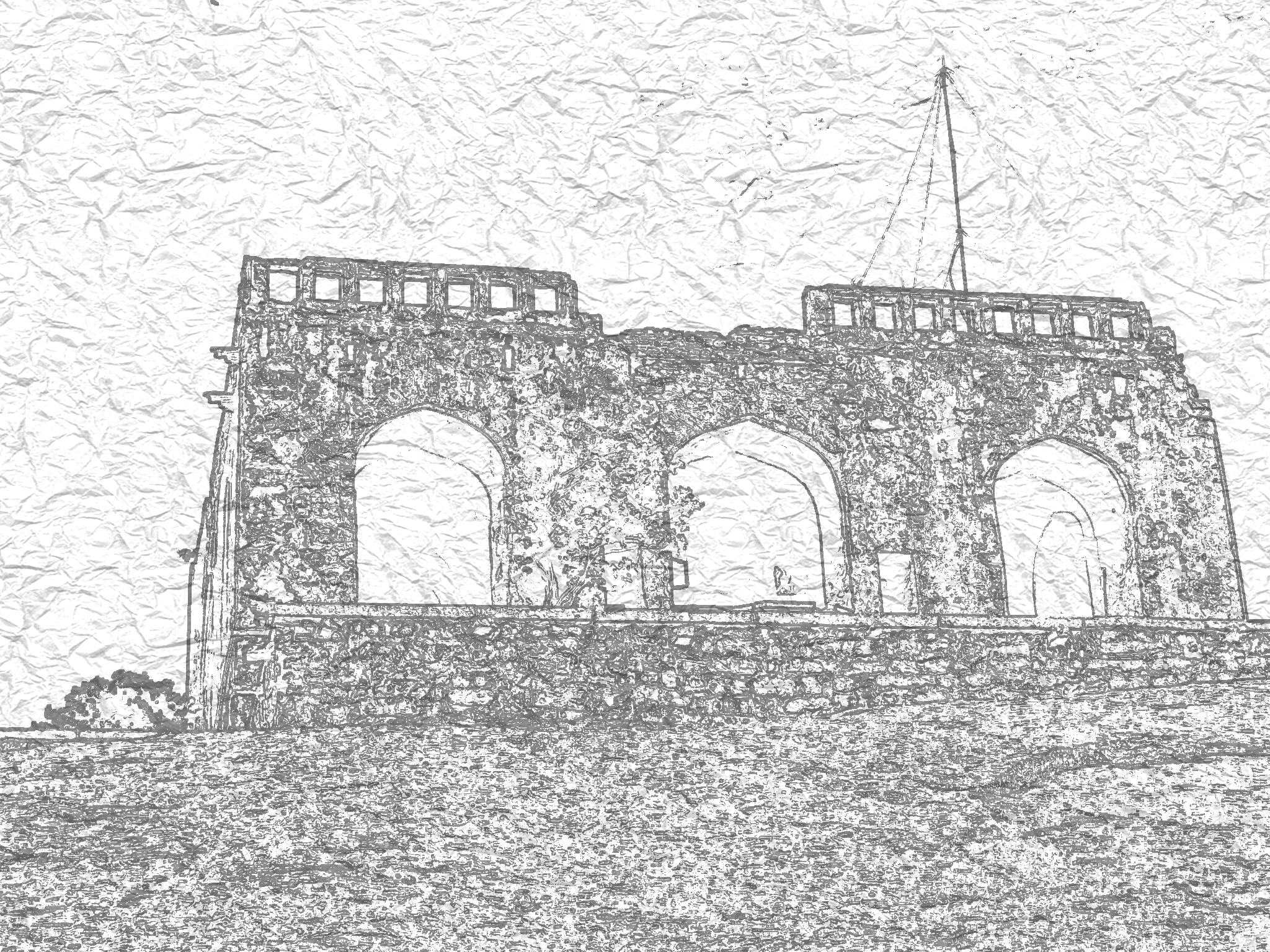 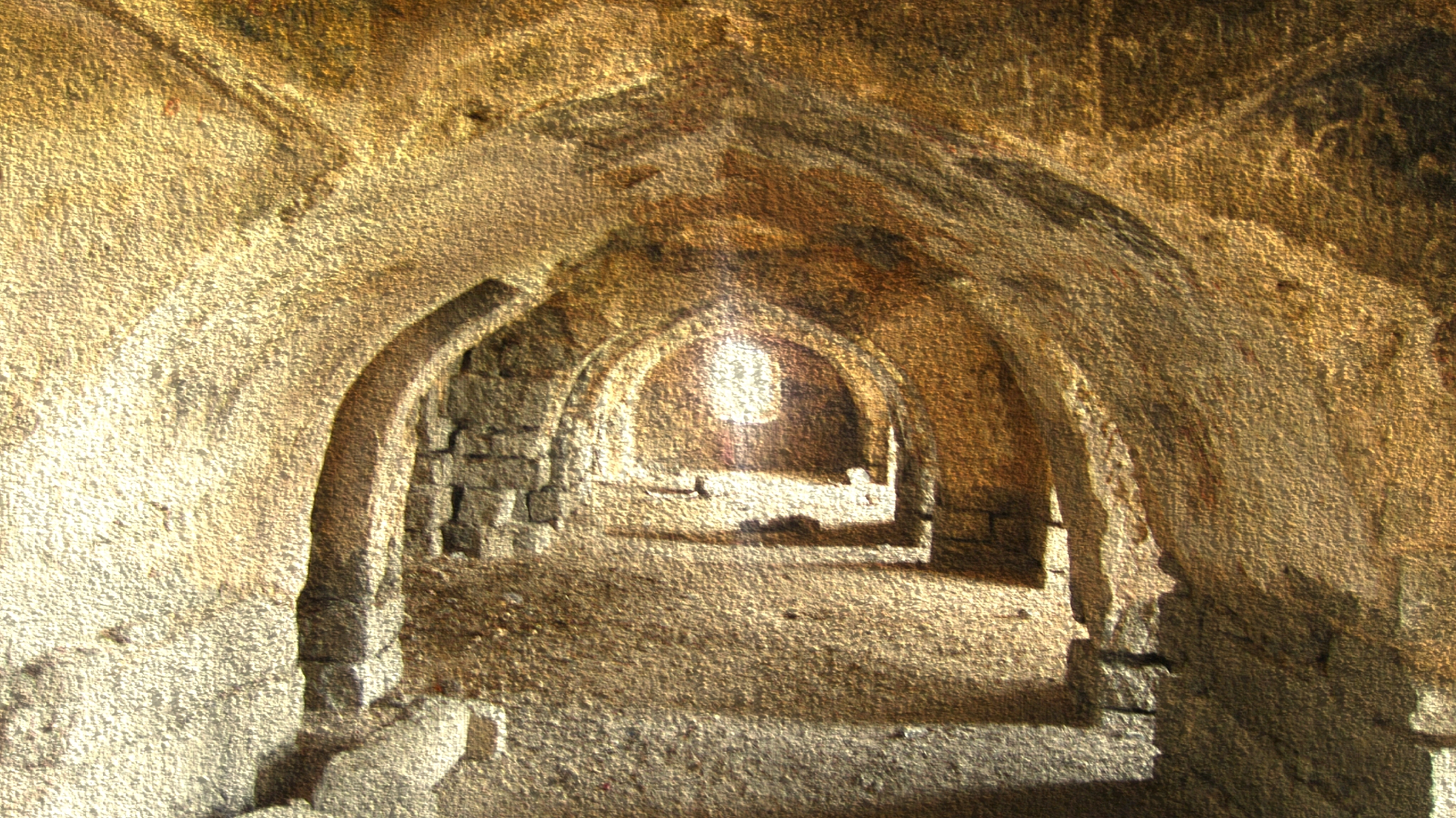 One could see the town of small people growing small small trees driving mini cars on narrow snake like roads from up there. Such small, yet differences so big. No? Wonder where the mind wanders sitting atop a fort with the eyes longing for sleep! 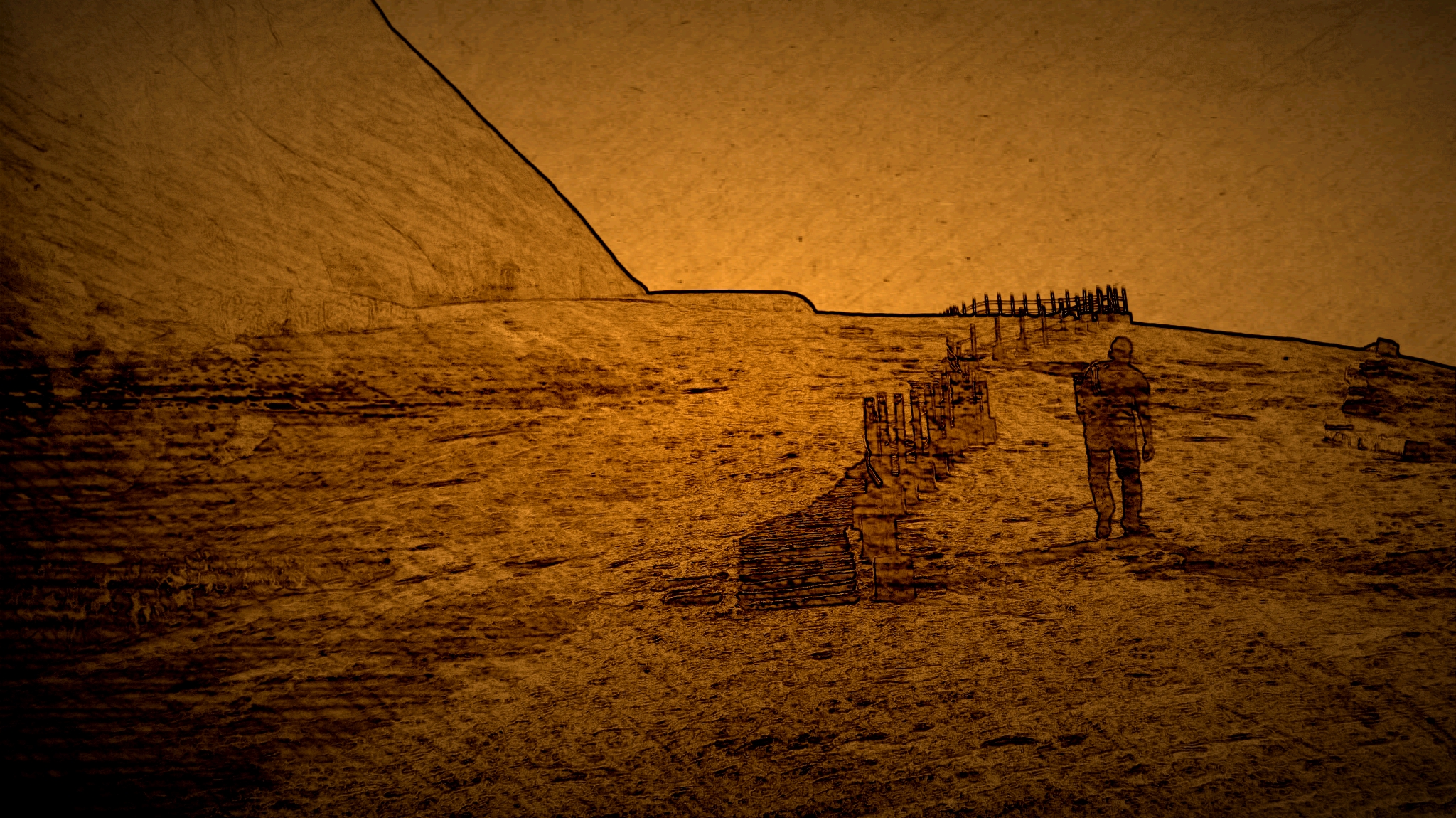 Coming back, we waded through the bushes to find our own way. With very less energy remaining in our system but not overlooking the highway discipline, we reached back safely and crashed for the day, a day that had been well spent. 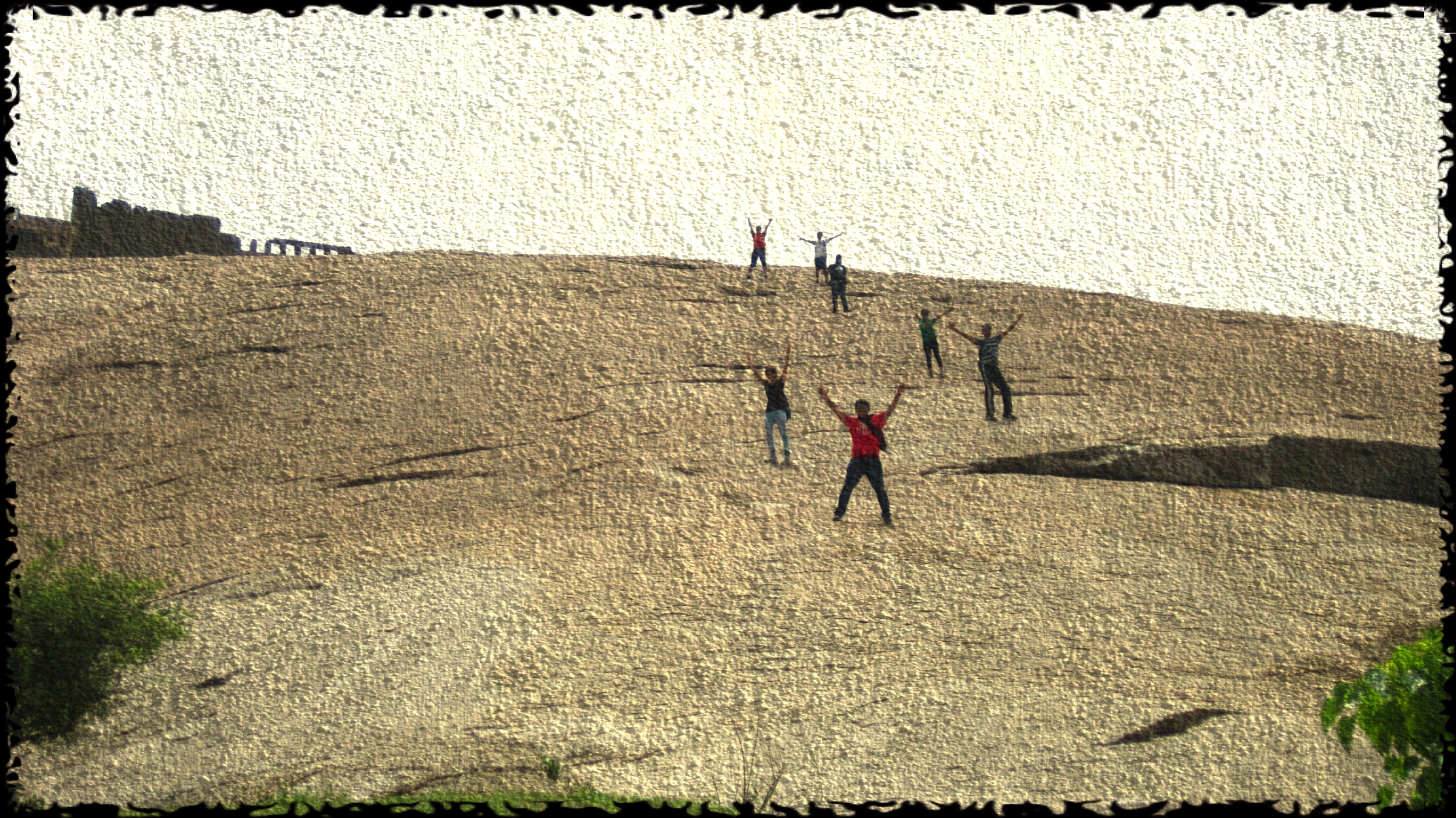 This ride n trek was organised by me, first of the sort. And it went well. Yay! 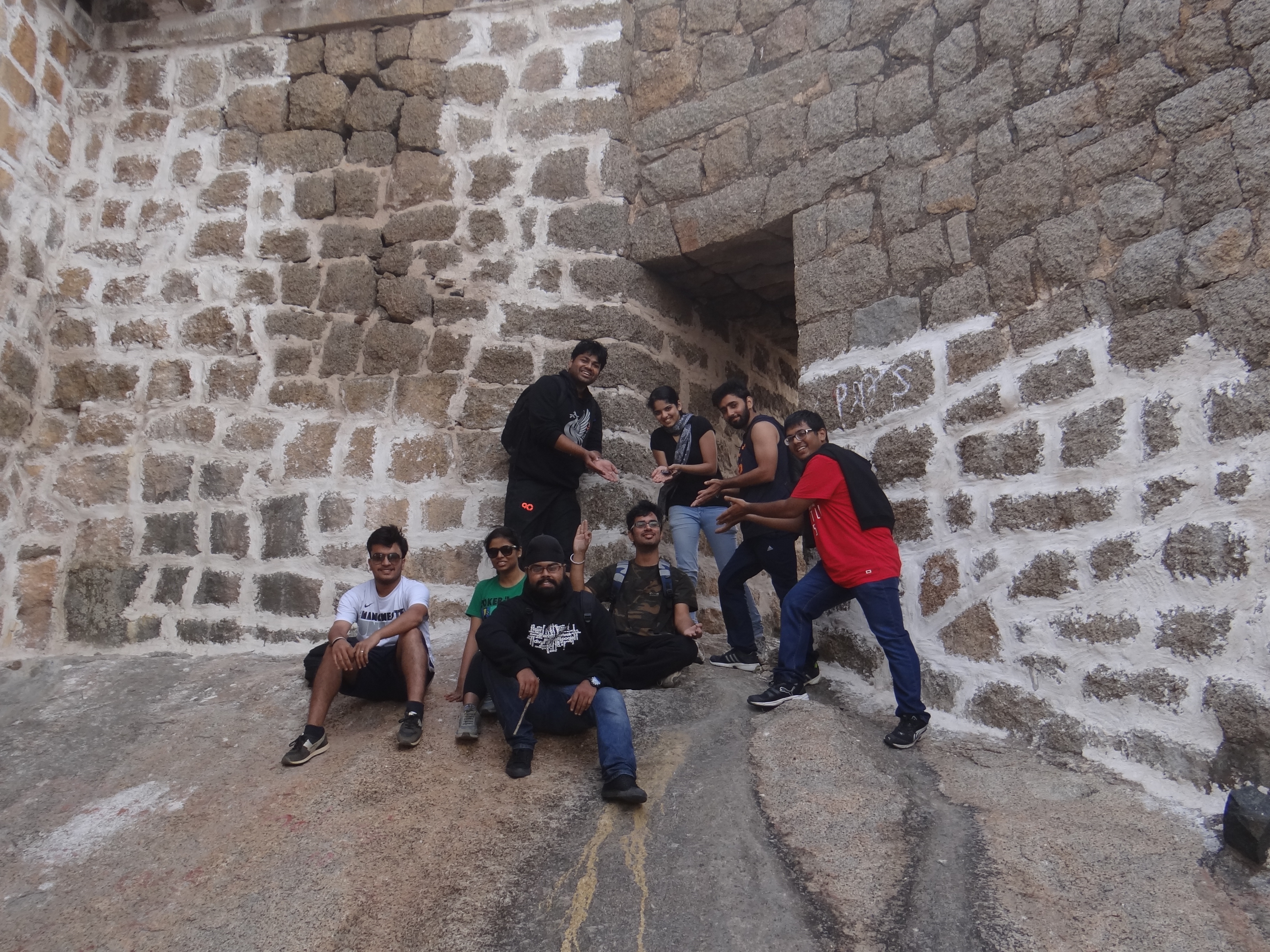 Also, I was travelling while posting this and had a lot of time. So, I got over emotional over photo editing. If you hated it, it’s okay; if you liked it, do let me know. 😉 And forget not to visit this fort, it’s a very good weekend getaway from Hyd.

Travelling without a Watch- A good travel advice!
Le Me says Hi.

seems to be quite exciting place…

Interesting place! You obviously enjoyed it. So you rode mobikes there and then trekked up to the top?

I’ve never been to that part of India. Mean to do it someday. But I haven’t even finished writing about the France trip.

Yeah man, it was a short 60 kms ride one way post which we trekked.
Hope you visit this part and more…

The happy pictures were fun to browse!

umm, I’m checking on the comments after a long time. Thanks Nagini. 🙂

Very interesting place. I somehow feel south India has more trekking opportunities than western part of India.
The pictures are fun to look at. 🙂

Thanks Nisha 🙂
Can’t confirm on that, haven’t much explored the Shayadris yet…!

Thank you! About the pictures editing, I was just vella! So, kept trying new things. 😀

Haha, Dio can keep up to 80s but not when others put in bouts of 90s and 100s! 😀
There was not much details, but if I were to put my money, I would it on Tribhuvanamalla Vikramaditya VI, whom Wikipedia claims to be the ruler who built this one in the 10th century.