Ahobilam- of the Night we Camped in the Nallamala Forest

We had trekked up the Ugra Stambha, the highest peak in Ahobilam and the Sun was setting down in the Nallamala Forest when we reached Jawala Narsimha, one of the 9 temples dedicated to Lord Narsimha in Ahobilam. And, we needed to camp. Quickly. 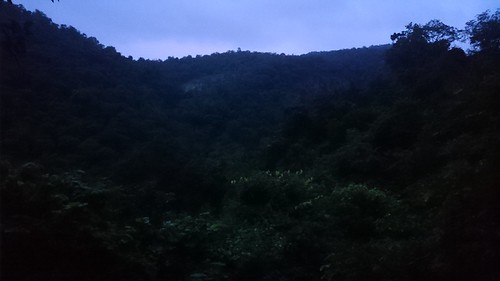 We trekked back to Malola temple where we had observed some flat ground and a flowing water source. The place looked like any other in a forest where trees and more trees were around us, and the occasional unfamiliar sounds. Most of the pilgrims had already left the place as no accommodation was available in the area. There was an abandoned hut (appeared so) near the area from where an axe, a utensil and some wood we obtained. Also, there was a tree nearby from which a saree hanged- just stating the facts!

The tents were out and pitched, about 2m apart. There was a boundary-less cliff near our tents but I made sure to not pitch facing that direction. We were almost pitched below a huge tree, and a hole in the ground was located close by. We brought some large stones and had it covered. With the tents pitched, and us dried and settled, the next concern was lighting the camp fire. Having just rained, we were unsuccessful in locating dry wood, and down the drain went the idea.

In the forest, it goes so dark, so early and so quick! We slid into our tent early off, for the dark around was not very promising. A noble idea to leave the curtain of the tent open was also turned down owing to mosquitoes and impenetrable darkness. Sitting inside the tent, tired and hungry, our next big worry was the puppies who were bent upon in biting our tents. It was surely going to be a long night! We gave some of our limited stock to them and their hunger probably abated, for the time being. Cards and ghost stories came next. Cards came as a major distraction to the whole scene for some time but then, ghost stories seemed a more interesting idea. Arka, the youngest of us all was seemingly getting too scared:

Poor fellow Arka got too scared that we stopped after a while. It was dinner time very soon for us and with no fire to cook the Maggi we had been carrying for our dinner, we had to eat it raw, forcing ourselves to swallow it down. Leaving for the other tent to crash for the night, we saw the darkness illuminated by a zillion fireflies! I and Arka ended up in the same tent in which I was and he had been too scared to mum even a word. He was probably carrying his swiss knife, a torch, a stick, a lighter, and many other things in his hands before he lied down. 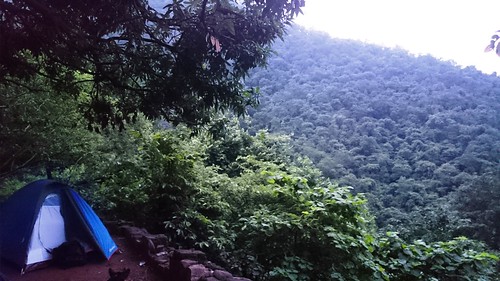 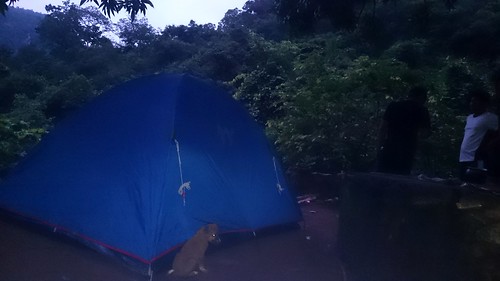 I had fallen asleep for some while only when I dreamt of somebody outside and Arka opening the tent to find out who it was. I asked Arka in my dream who it was but actually mumbled it loud for him to hear. The otherwise scared Arka became too terrified of this and said, “Don’t kid with me”, but actually I was not. And then after some while…noises came.

The puppies had again started making sounds and so did their mom. I had woken up to realize the time was exact 12 of midnight! Fear was there, of course, but I started processing things and analyzing. The puppies whom we had treated nicely in the evening won’t be turning against us in the midnight. So, it was clear that somebody/something unfamiliar had come. Or, that they were hungry. Arka and I made no sounds, though we could hear some from the other tent implying Gopal and Prateek were also up. For 1 complete hour they barked and we couldn’t and didn’t do anything. Sleep enveloped me once again after the incident, I can’t say the same for Arka though. It was a cold night but the tiring trek of the day made me numb to everything else.

Hearing the rooster go in the morning at 5 was the best sound in the whole wide world at the time. “It was finally daylight!”, Arka shouted. It was a beautiful morning and the forest looked even more dense. Fog was rising up from trees below and there slept near our tents were the puppies cozied up with their mom. Gopal and Prateek had a frightening night too but they had confused the silence from our tent in the night with our confidence and my experience with camping. Little did they know – Darr sabko lagta hai! (Everybody fears!)

It was a frightening experience, sure but you do need kicks like these from time to time! 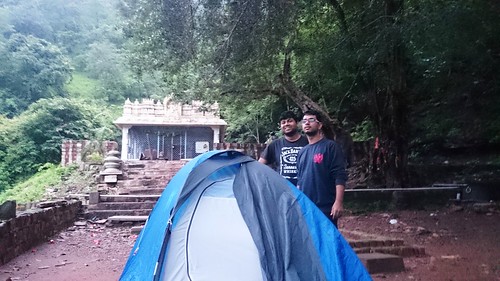 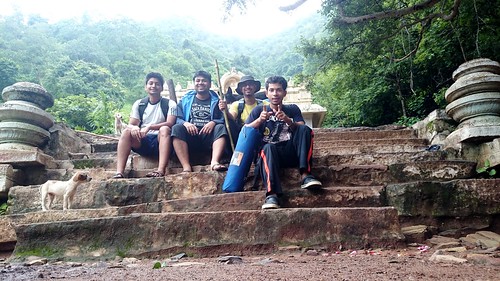 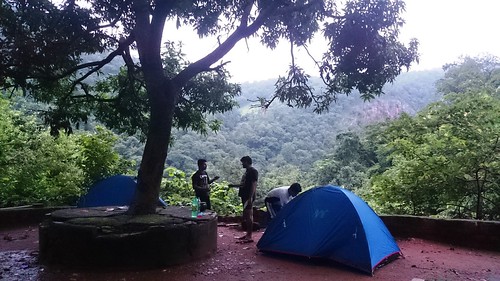 Ahobilam- of Being Grateful
The Night before a Ride

Yeah, it was too adventurous! 😀

This place looks so out of this world…amazing

The beauty of this place took us all by surprise right from our arrival! It’s an amazing one, and so close to Hyd but people hardly know about it!

Oh…what a camping night in the jungle…I can feel the thrill 🙂 Nice post!

Thanks Moon, it was one crazy night! 😀

I heard about this place from my uncle who has been asking me to visit the temple…I know now what it looks and feels like 🙂 Camping will be so much fun isn’t it? I have not got a chance to do that yet 🙁 someday!! *sigh*

Go for it sometime! I wouldn’t recommend camping here though unless you are properly equipped and have a fair amount of camping experience in the wild…

Jatin, very thrilling experience. But, we five are planning to camp at ahobilam, is there any restrictions by the forest department? If, not which would be an alternative place for camping.

Yes, the forest department forbids you to camp in the jungle. I don’t think there is any well suited place for camping in Ahobilam. If you really want to camp, you can camp in front of the dharamshaala at Lower Ahobilam Temple after taking permissions. Otherwise, you can go ask the priests at Paavana Narsimha temple to stay in the temple for the night if other people also stay there. Surrounded by forest and mountains, Paavana Narsimha temple would be a good place to spend the night.

Yes, many skip the Ugra Stambha. Congrats for making it to the top… 🙂

What a thrilling night!

Next time you go camping, maybe you should carry a thermos flask of hot water and an airtight container (along with the extra bottle of water you carry these days ;)) Just in case you are not able to light a fire this will help — empty your Maggi noodles into the air-tight container, add your hot water to it (along with the noodles’ masala) leave it aside for 10 to 15 minutes. And you just might have some slow-cooked dinner. 😉 (from my hostel diaries. :D)

You always have the best improvisations for me. Thanks again And guess what, we did just that when we trekked to Rajgad Fort in Mahrashtra (story to come up in it’s due time). We had camp fire and heated water, to have the cuppa noodles and the ready-in-a-minute Poha 😀

Seems like a cool trip, Jatin. Read all the posts and enjoyed reading them.

Ohh, here is one for you: While browsing photos in my phone, I saw a pic of me sleeping in my house on my bed. I live alone.
Have Fun 😀

This must have been a scary adventure! You sure the were just puppies and the jungle didnt have any ghosts! 😛

Oh it is till date one of the scariest after my solo camping experience on a Karnataka beach. Haha, about the ghosts, don’t even ask, we just survived the night! 😀 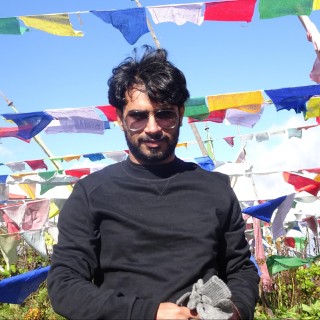